The Exhibition ESTUÁRIOS《estuaries》by Arlindo Arez will be opening the 7th of December, at the temporary exhibition hall of the Museum of Portimão. It was curated by LeandroArez with texts by Fernando Barrionuevo,director and comisar of MECA Mediterráneo Centro Artístico. The Exhibition will last until the 23rd of February.

Throughout the exhibition,the public will have the opportunity to experience the recent works developed by Arlindo Arez, a local contemporary artist with international renown.

The theme of the exhibition – estuaries – aims at reframing the works, undoubtedly abstract, in a historic lineage of landscape painting, reinterpreted, of course,inawaythatcould almost be compared to Abstract Expressionism . The blue tones,present throughout most of the works through spills and drips, evoking the aquatic themes, are then submitted to an affirmative gesture of rigid geometries and darkertones. This transmutes the idea of water into an ecosystem, of affirmative action over the mass of water, be it human action or nature. Certainly, it isn’t impossible to relate Arlindo Arez’s paintings to maps, archipelagoes or piers, but always with an interpretative liberty, almost like Rorschach’s inkblots. This is where the idea of estuary claimsits relevance for this exhibition. An Estuary, as we know, is the transitional environment in which a river connects to the sea.A breach of Nature’s boundaries. The river’s linearity is so strong that it extends beyond itself and penetrates the massive, perennial and stoic body of water. From a philosophical standpoint, the idea of something which becomes intelligible by the structures it establishes with other things is always an interesting subject,this is,the way the estuary is defined by the concepts of river and sea, but in the idea of estuary the reis the transmutation of the idea into reality in which the idea reaches concrete dimension and conceptual depth. Truth is, the estuary landscape is identifiable, practicable and lived within itself, even though it can also be defined through other concepts.

Expropriating this concept out of its original bioclimatic context and relating its conceptual dimension to the existence of three different moments with in the selected body of work, a parallel discourse is proposed for the exhibition layout. The exhibition comprises of three rooms, each one featuring a selection of formally similar works, be it fortechnique,medium or theme, punctuated by a sculpture which synthesizes the mood set by the paintings in a three-dimensional relic-like object, an atemporal artifact. Each of the rooms presents a different tone set by a tripartition of life. The idea of tripartition of life echoes throughout history, for example, the portuguese philosopher Leonardo Coímbra’s, A Alegria, a Dor e a Graça, or the portuguese symbolist painter Alberto Carneiro’s, Esperança, Amore Saudade. Through the disparity found between each of the concepts that characterize the two triptychs (Joy-Hope, Pain-Love and Grace-Longing), we understand that a specific symbolic meaning is not attainable nor desired. On the other hand, what is actually desired is for the public to think in which way a tripartition of their lives, until the moment of experiencing the exhibition and beyond, can be related to the atmospheres presented within each room.

Returning to the image of the river that follows its course until the moment it reaches out and beyond the sea at the estuary, so this set of sculptures, which form a series between themselves, cut through the borders of each room. Even though they are presented as a synthesis and materialization of the subjective concepts of each room, they follow their own path,like the river’s last breath,its swan song,as it fades away within the sea. We ask ourselves if the phases in which we organize the distinct and successive periods of our lives aren’t themselves estuaries, moments of autonomy and boldness, between the constrained gallop of the river before diving into this indecipherable immensity of the next phase, the Sea.

Arlindo Arez was born,the 15th of November, 1957. Even though he showed an aptitude for the arts from an early age, it was only in the mid 90s’ that he formalized an artistic career with his first individual exhibition in Lagos’s Cultural Center. From then on, his work has breached borders counting with participations in dozens of international exhibitions, both collective and individual, as well as permanent public works in countries like Portugal, Germany, Austria, Switzerland, Belgium, Costa Rica, Cyprus, Serbia, Mexico, Thailand, Italy, Tunisia, Azerbaijan, Albany, France, South Korea, Spain, Syria, China, Russia, Brazil, Denmark, Andorra, Argentina, Egypt, India, Lithuania and Malta. Parallel to his artistic career, he developed a series of curatorial projects, involving public art, the result of which is still spread out through Portimão, Alvorand Monchique that now have a series of monumental public sculptures by internationally renowned artists throughout their streets, resulting in the cultural development and increase of artistic appreciation in the region. With its first edition in the year 2000, he had seven editions of the International Sculpture Symposium, two editions of the International Wax Sculpture Symposium, two editions of Ruralidades – Art in Rural Space and two editions of the International Painting Symposium, of which the second edition was celebrated this year. Since 2007 he presides over the cultural association Cuneo Sularte which envisages the cultural promotion within the Algarve.

We Hope to have you at the opening, the 7th of December 2019, ir during the exhibition which lasts until until the 23rd of February 2020.
-Leandro Martins Arez

The natural hybridization that emanates from the personality of the artist Arlindo Arez reveals itself sequentially throughout his dedicated professional career in which he strives for the universal character of multiculturality combining it with the concerns of the artistic environment. This artist from the Algarve is a constructor of imagined images in which our identity converges into the identity of others. Throughout his vast artistic biography, a very personal ecosystem develops in which a subject with no identifiable gender nurtures his works with an active and natural side that gives it a unique, almost understated, consciousness.

The artist’s geographic origin is not trivial. The South, in whichever country it may be, offers character. Character of empathy, universality,of worthy,just and equitative compromise.In his own primal essence,this aloof,quiet and reflexive artist delights us with an endless amount of work, created in his studio surrounded by a singular and complex natural environment. Even though it could easily be defined,it is not my intention to develop a reductionist discourse on his recent work. The mission of any artist, and in the case of Arlindo, totally fulfilled, is to offer complex visions with visually simple, but conceptually understated, images. In fact, his visceral mind contradicts itself many times with the train of thought suggested by his series of sculptures. Albeit,this dichotomy between reason and emotion fades in his pictoric work in which he awakens pure gestual expression that transcends beyond the dichotomy embedded in the chromatism and praise of his region of origin.

Even though he is an Artist of the world, Arlindo Arez doesn’t boast abou this worldly baggage. On the contrary, his authentic ethic discretion shrouds him in an aura of autonomous simplicity incomparable to the sensibility demonstrated in his artistic production.

On his exhibition ESTUARIOS the option to travel with him, through his world, his experiences and thoughts, in not an invitation. It is a silent walk through his varied worlds. Observing and letting ourselves go by his emotions until they become our own,will be the most adequate way Arlindo Arez transports us through his interior world.

★Welcome link to watch the creation of Arlindo Arez 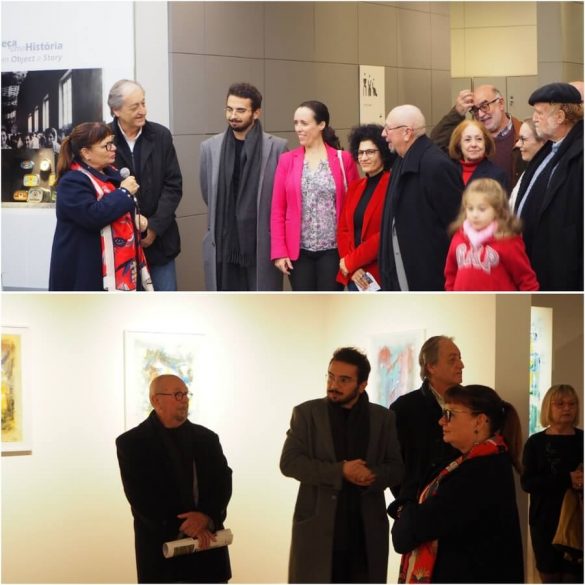 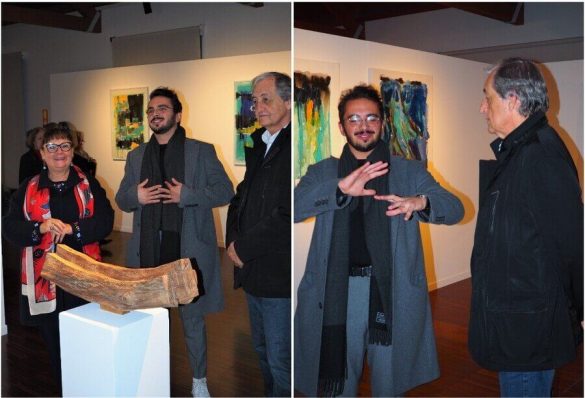 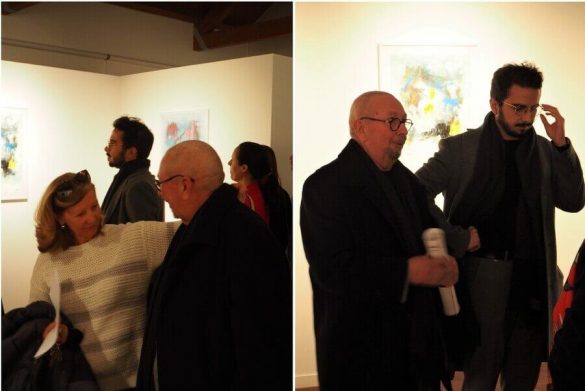 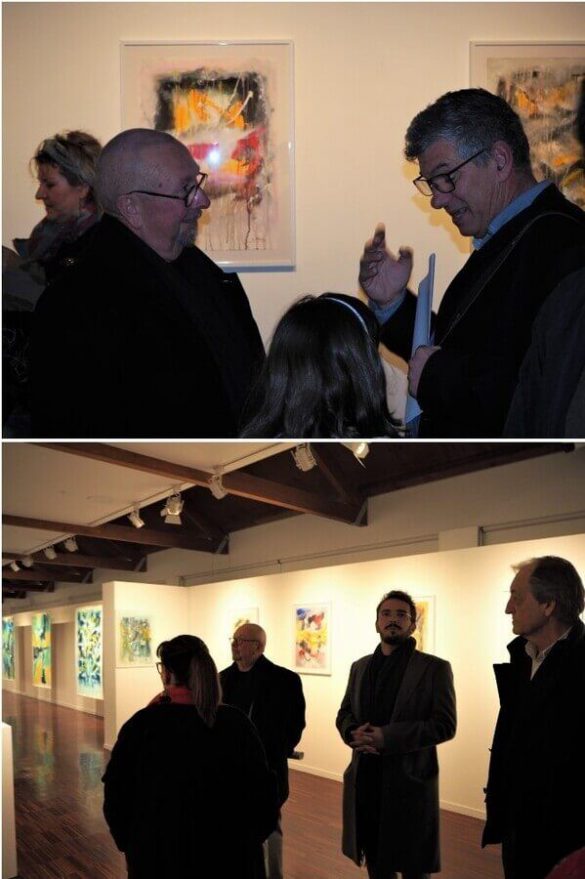 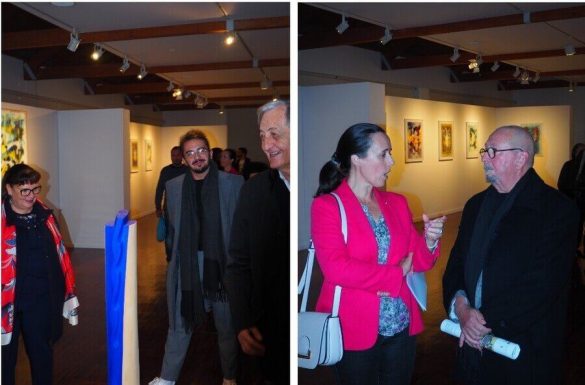 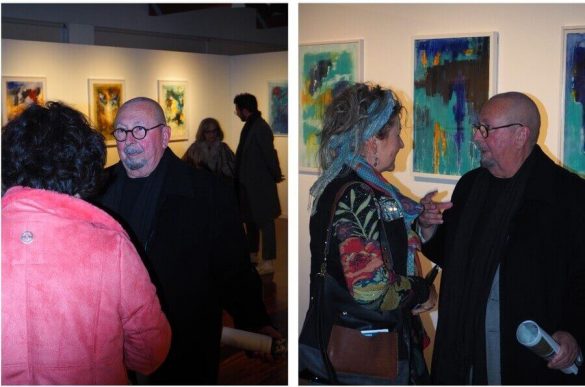 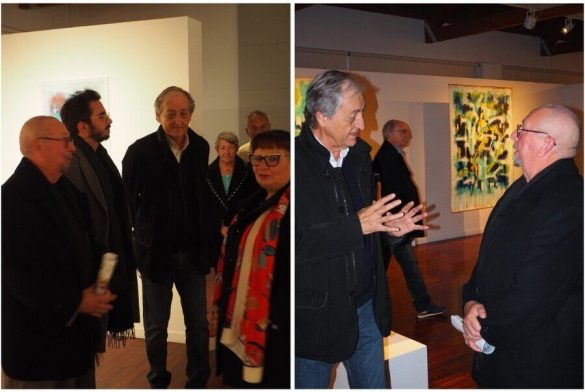 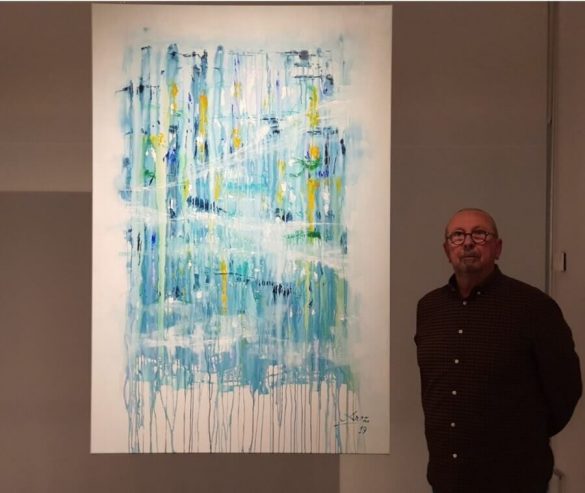 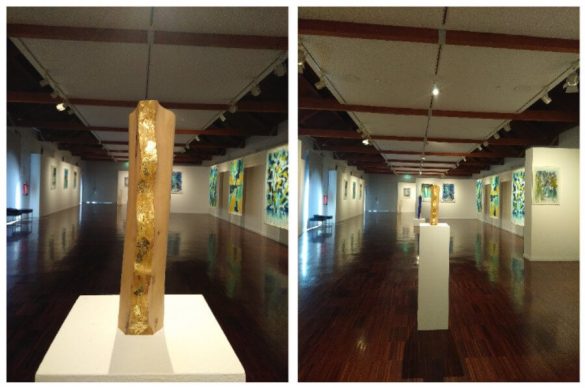 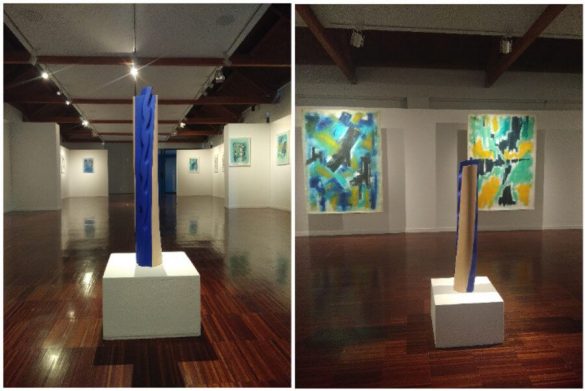 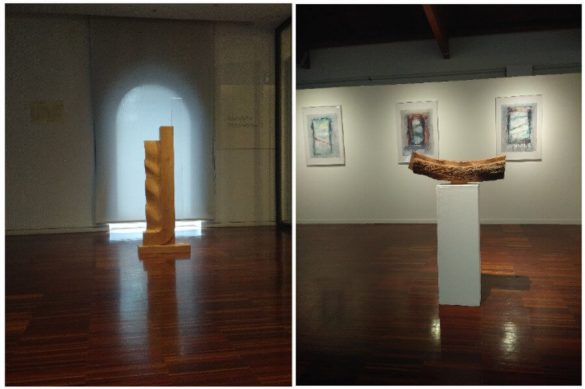 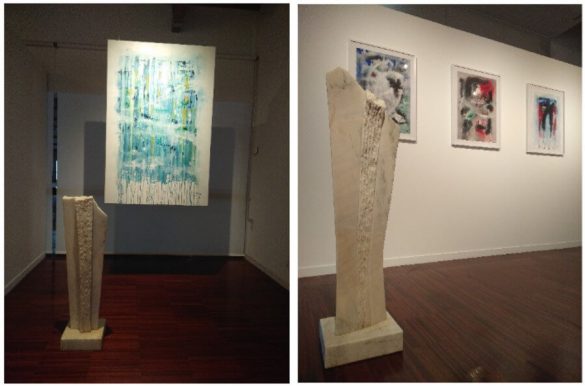 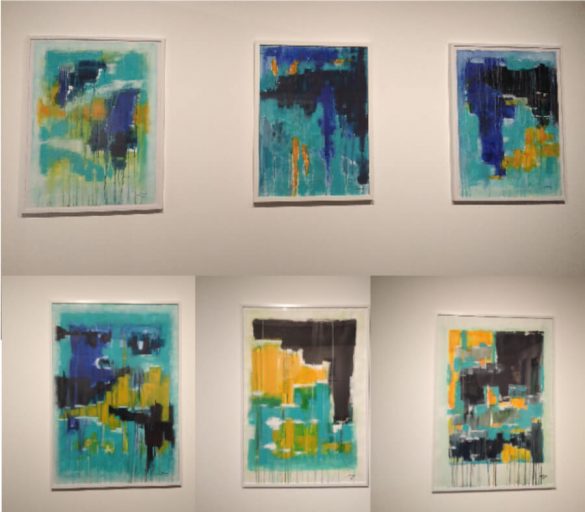 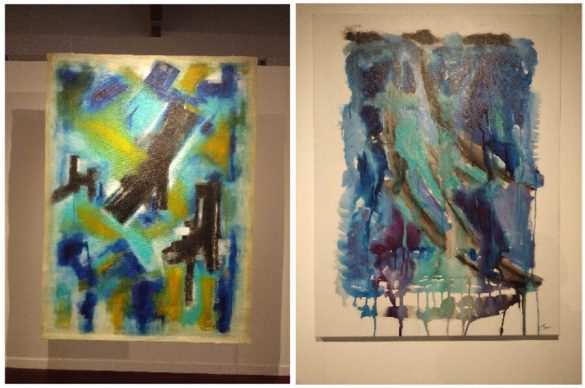 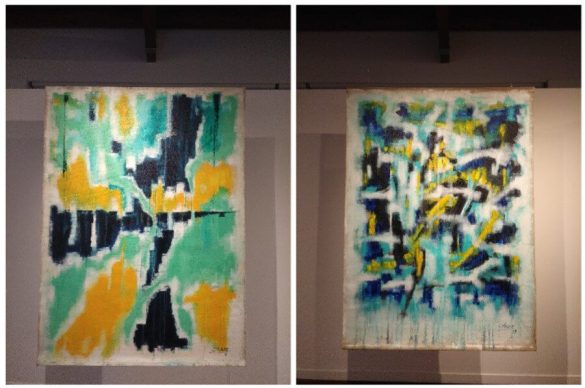 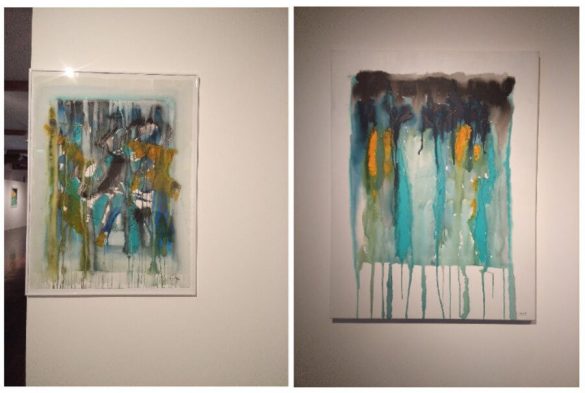 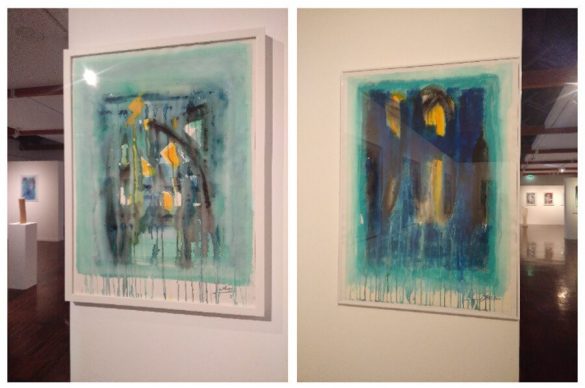 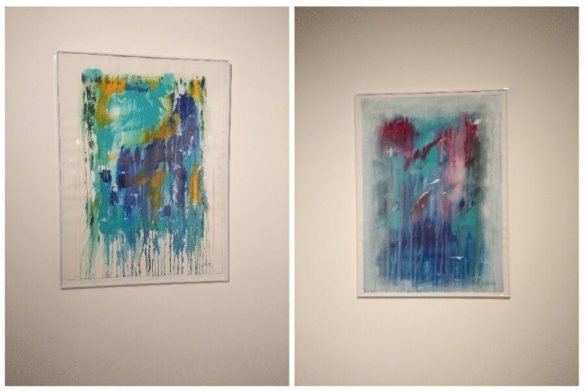 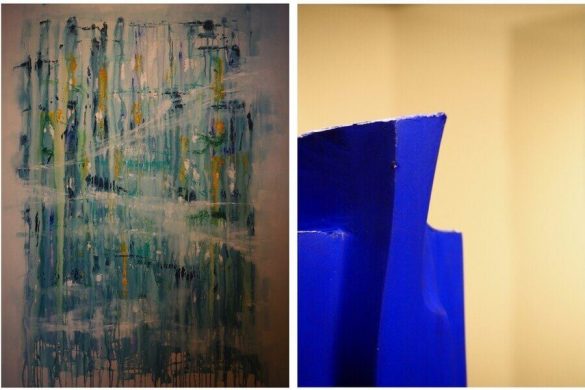 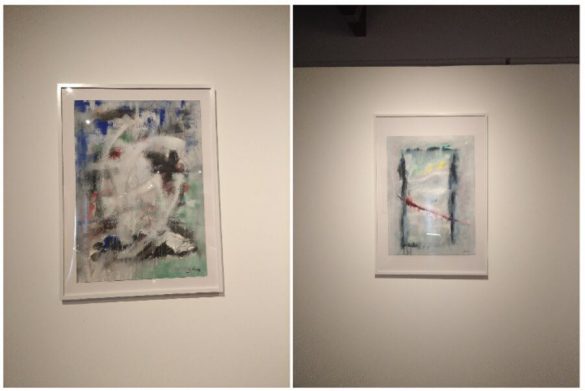 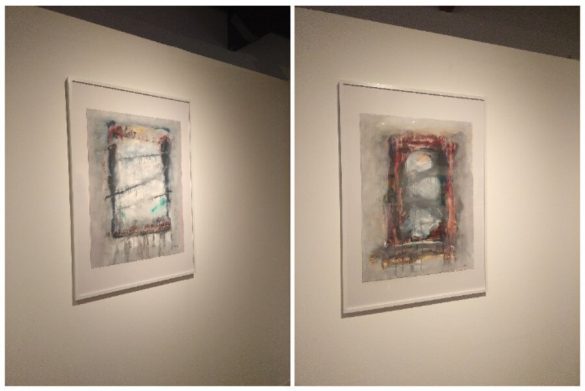 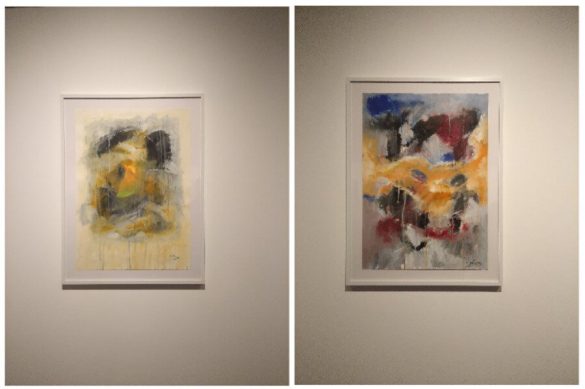 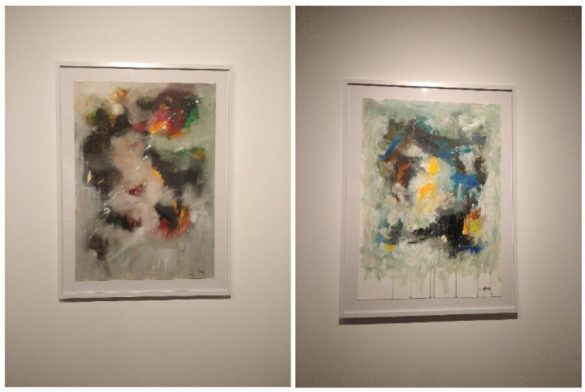 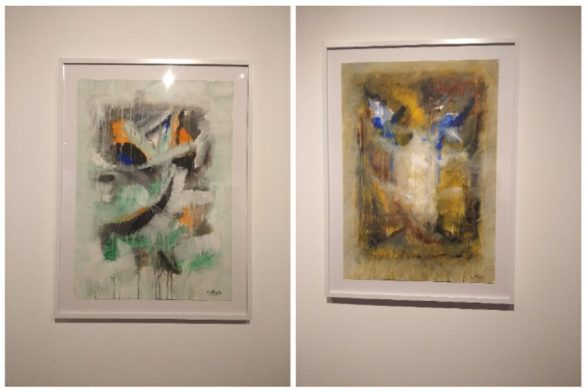 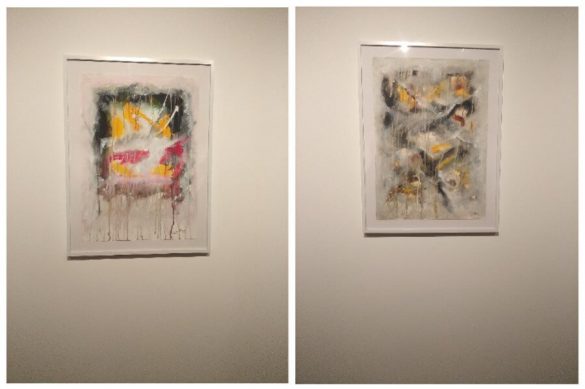 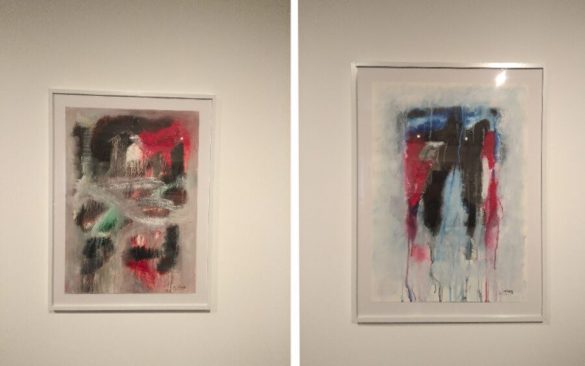 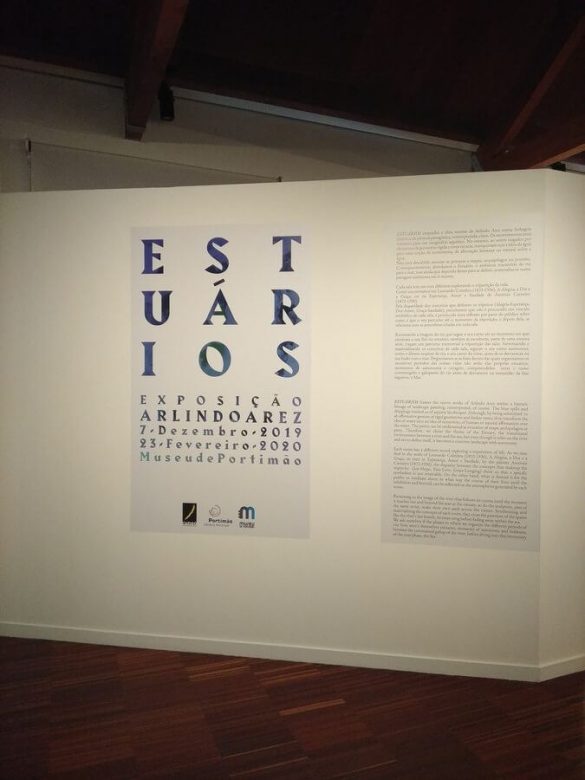