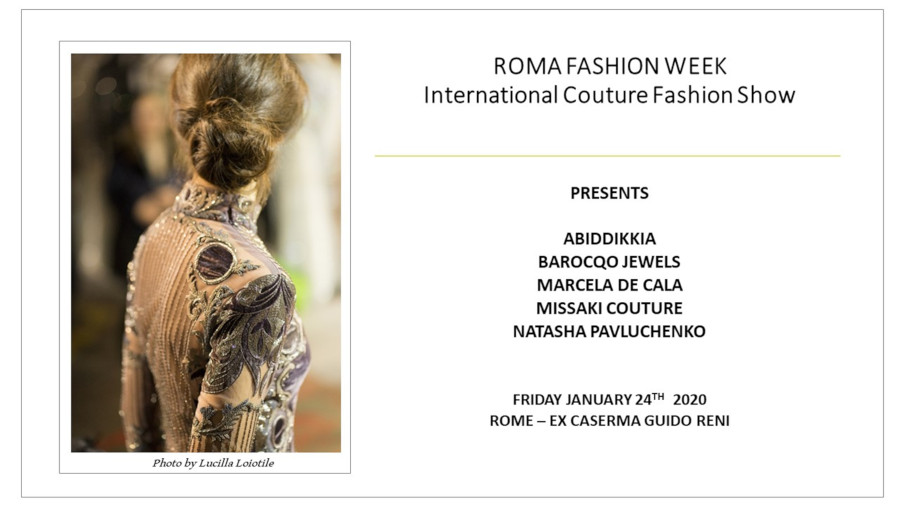 The fourth edition of the International Couture Fashion Show is on! organized by the Italian Lebanese Cultural Institute which has carefully selected Italian and International designers to parade on the ALTAROMA catwalk at the Ex Caserma Guido Reni. A mystical common thread joins Fashion with Beauty. The following designers are presenting their couture collections: Abiddikkia, Barocqo Jewelry, Marcela de Cala, Missaki Couture and Natasha Pavluchenko.

In opening of the International Couture Fashion Show a tribute to the city of Tursi-Matera and to Maria di Anglona is honored by the Polish designer Natasha Pavluchenko presenting her collection entitled “Maria Anglona”, testimony of how history influences and drives fashion. Natasha Pavluchenko was struck by the beauty of the Virgin of Anglona who transmitted spirituality, faith and energy to her. Giovanna Mandarano’s A’biddikkia designer, confirms the DNA of her Brand always linked to the Mediterranean taste and influenced by her beloved Panarea, her couture collection entitled “The Rebirth of Fashion” is a succession of colourful clothes with the addition of details evocative to the Baroque style. Missaki Couture, from Lebanon makes dreaming the odalisques along with “Cyra”, its beauty and colours are the source for his inspiration which also becomes the title of Missak Farassian couture collection presented at International Couture. The celestial Jewels of Baroqco with the collection “Stairways to Heaven” elevate the soul of the woman who wears those Jewels and in conclusion the “Vieira” collection by the designer Marcela de Cala inspired by the myths and stories of the famous Vieira of Santiago de Compostela. The look of the models is made for the make-up by the Face Place Academy by Pablo – Art director Gil Cagné, for hairstyles by Professional Sebastian under the artistic direction of Giovanni Salerno, the shoes for International Couture catwalk are Rugantino by Alessi & Alessi.
Among the guests, their Excellencies Ambassadors from designers countries, Prof. dr. Giuseppe Anelli President of the Sapentia Mundi foundation, Eng. Antonello De Santis President of the Jonica Turismo Network, dr. Giovanni Oliva General Secretary  for Matera 2019 Foundation, the Mayor of  Tursi  Prof. Salvatore Cosma, Deputy Mayor Maria Anglona Adduci,  Councilor Roberto Trani, Prof. dr. Mangialardi, the TV presenter Janet De Nardis, the actresses Cristina Pelliccia, Anna Bellato, Teresa Romagnoli, Esther Elisha, the actor Josafat Vagni, the presenter Anthony Peth, the Artist Ilian Rachov and many others from the world of Fashion and Entertainment.

“MARIA DI ANGLONA” BY NATASHA PAVLUCHENKO For a long time, looking at the world I was looking for something that would help me take the next step in my creation. I found this step here in Tursi where, looking into the eyes of the effigy of the Madonna, I had the inspiration to create a collection that will be the deepest translation of the inner intimate and for one’s own human condition “. The Polish designer Natasha Pavluchenko is opening International Couture, on the ALTAROMA catwalk, with the collection entitled “Maria di Anglona”, testimony of how history influences and drives fashion. Natasha Pavluchenko was struck by the beauty of the Virgin of Anglona who transmitted spirituality, faith and energy to her. The common thread of the entire collection is the “Altarpiece ” dating back to 1700 in plaster and polychrome, placed today next to the Virgin. The inspiration, to design this new Maria Anglona collection emerges from the importance of the city of Tursi and exactly from the minor Basilica of Anglona together with the Historic center and the collegiate Church of Santa Maria Maggiore in Rabatana. A delegation from Basilicata are special guests at Natasha Pavluchenko fashion show, made up of press and leading personalities, including Prof. dr. Giuseppe Anelli President of the Sapentia Mundi foundation, Eng. Antonello De Santis President of the Jonica Turismo Network, dr. Giovanni Oliva General Secretary  for Matera 2019 Foundation, the Mayor of  Tursi  Prof. Salvatore Cosma, Deputy Mayor Maria Anglona Adduci,  Councilor Roberto Trani and Prof. dr. Mangialardi.

“THE REBIRTH OF FASHION” BY A’BIDDIKKIA The new couture collection presented by Giovanna Mandarano A’BIDDIKKIA’s designer is titled “The Rebirth of Fashion” and it’s fabled with a mix of fine fabrics in bright colors that always recall to the designer native land. A romantic collection exposed along with a baroque-inspired geometric designs that combine with a perfect harmony all elements that characterize the landscape of Panarea such as the sea, the sun, citrus fruits, pomegranates, flowers and the inevitable Sicilian puppets. The “Rebirth of Fashion” collection confirms the brand’s DNA, always linked to the Mediterranean taste and influenced by the place where it was born and raised. On the ALTAROMA catwalk, a succession of colorful  outfits done with high quality fabrics and manufacture, all made in Italy and together with silhouette shapes underline the women elegance and accentuate her femininity.

“STAIRWAYS TO HEAVEN” BY BAROQCO COUTURE JEWELRY Closer to GOD with a pure and beautiful soul. That is the inspiration for this collection Pureness in beauty is reflected by its uniqueness of handmade designs special made for ALTAROMA. Being closer to God in pureness of the Soul to stand out in our turbulence World we live in. Our Stairways to Heaven Collection is created for the empowered woman, who is different and stand out of the crowd. Being different is unique and being different you are unique. The collection was made of precious metal plated with 24-karat gold by combining decorations and embellishments with the application of SWAROVKSI ELEMENTS© and semi-precious stones that come from Indonesia and Brazil.

“CYRA” BY MISSAKI COUTURE The couture collection through embroideries and silhouettes is the regally elegant collection titled Cyra.  Cyra a name of Greek origin means the sun, throne, or lord. It means having a deep inner desire to use abilities in leadership, caring about details. The collection was inspired from the colors of Cyra and its beauty.

“VIEIRA” BY MARCELA DE CALA To conclude the International Couture fashion show, designer Marcela de Cala presents the collection entitled “Vieira” which is inspired by the myths & tales behind the famous Vieira of Santiago de Compostela, Marcela de Cala’s 2021 Haute Couture & Bridal Collection started coming to life. Vieira was said to be a metaphor to help people find their way & assure they are on the right path, and this was our biggest source of inspiration towards creating unabashedly feminine gowns & bridal wear symbolizing the beginning of a beautiful journeys yet to come. Shades of white, intricate embroideries, and wildly romantic layering techniques where used in the creation of our collection trying to capture the essence of the story behind the shell. The shape of the shell itself played a big role in adding to the signature dramatic & voluminous silhouettes of Marcela de Cala, combined with exquisite embellishments & pearl shells to give 2021’s haute couture collection new dimensions. 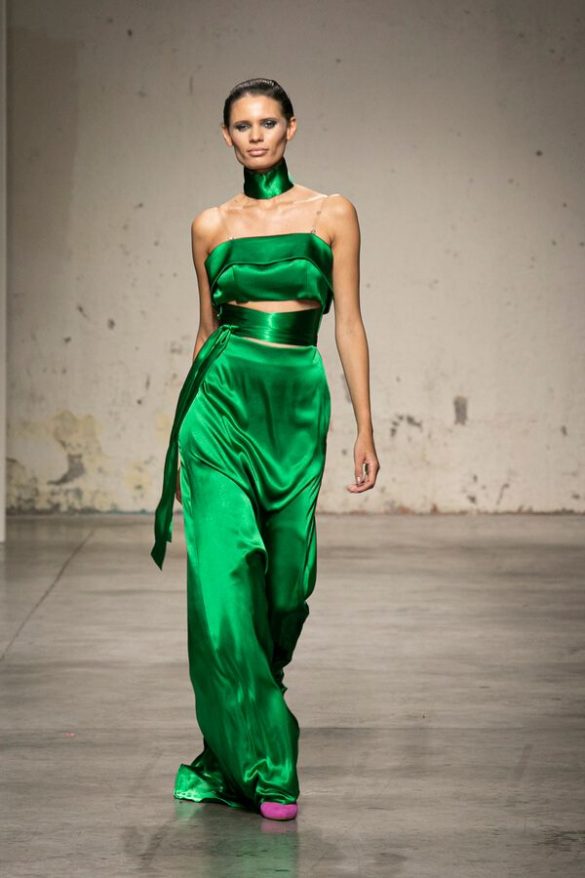 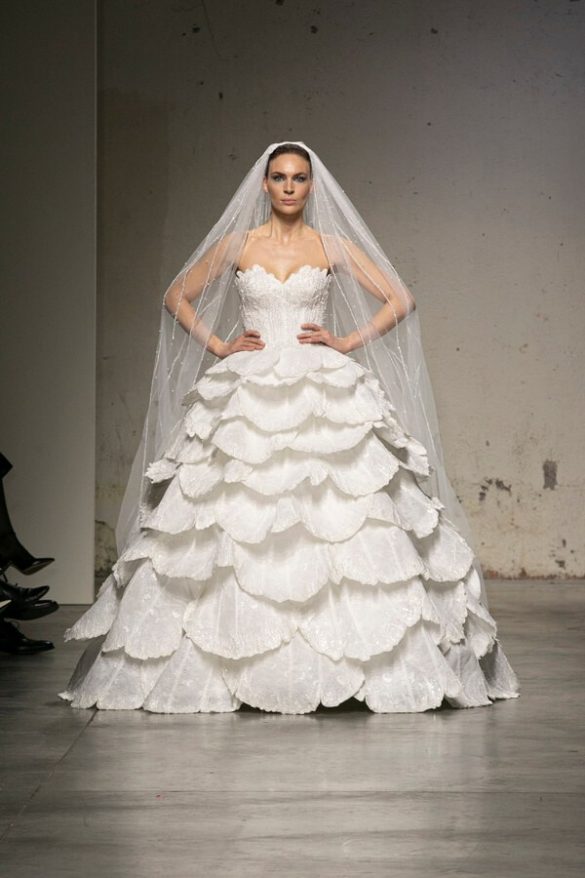 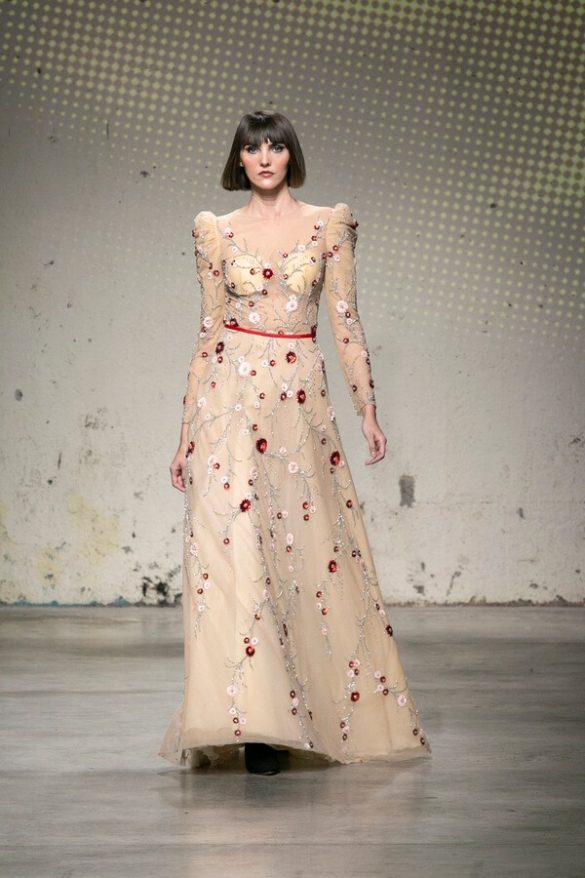 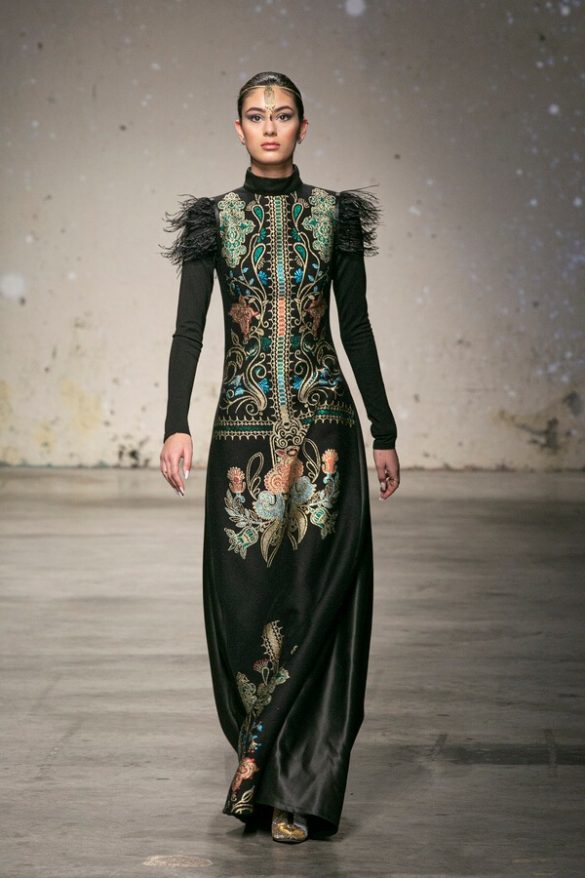